Baptism in the name of Jesus Christ for the remission of sins is the proper response to "burial" when obeying the Gospel of Jesus Christ as commanded by the Apostle Peter on the day of Pentecost:

Repent, be baptized everyone of you in the name of Jesus Christ for the remission of sins, and you shall receive the gift of the Holy Ghost (Acts 2:38).

Baptism is the immersion or submersion of a person in water. The root of the word for baptize in the Greek is "baptizo", which means to "dip repeatedly, to immerse, submerge, or to cleanse by dipping or submerging, to wash, to make clean with water". This meaning does not allow for water to be sprinkled on (aspersion), or poured on (affusion) when a person is baptized. 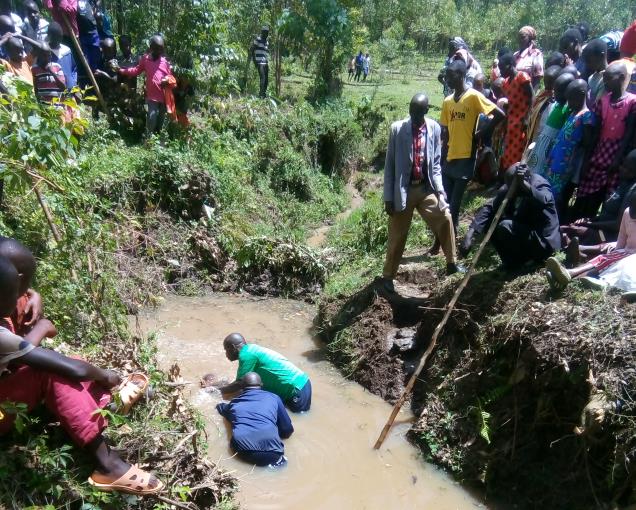 What were Jesus' instructions about being baptized?

Jesus, said that baptism was necessary for salvation:

He gave his disciples clear instructions to evangelize the world, baptizing the lost:

Go ye therefore, and teach all nations, baptizing them in the name of the Father, and of the Son, and of the Holy Ghost (Matthew 28:19).

When Jesus came to John the Baptist, John didn't want to baptize Jesus as he knew that Jesus is fully God. Jesus, knowing that He was also fully man, the Son of God, knew that He needed to be baptized for righteousness sake. Notice in the scripture below that Jesus came out of the water so that He had to be immersed by John.

Then Jesus came from Galilee to the Jordan to John, to be baptized by him. John would have prevented him, saying, “I need to be baptized by you, and do you come to me?” But Jesus answered him, “Let it be so now, for thus it is fitting for us to fulfill all righteousness.” Then he consented. And when Jesus was baptized, immediately he went up from the water and behold, the heavens were opened to him, and he saw the Spirit of God descending like a dove and coming to rest on him (Matthew 3:13-16 ESV). 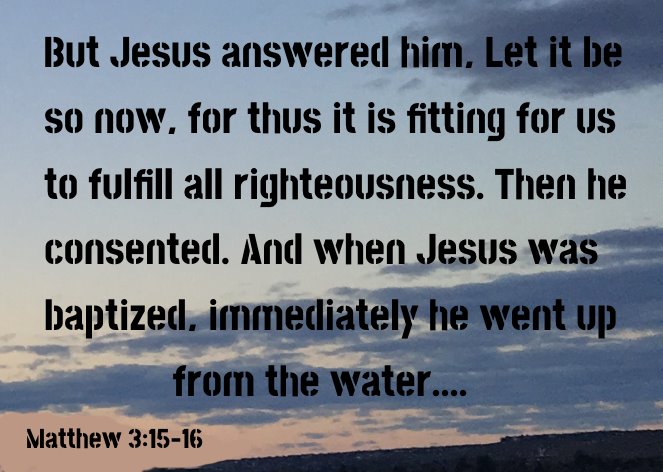 In the Name of Jesus Christ

Just before His ascension, Jesus met with His disciples and opened their understanding:

Then opened he their understanding, that they might understand the scriptures, And said unto them, Thus it is written, and thus it behooved Christ to suffer, and to rise from the dead the third day: And that repentance and remission of sins should be preached in his name among all nations, beginning at Jerusalem. (Luke 24:45-47)

It was clearly the responsibility of His disciples to propagate the gospel. Having their understanding opened regarding the plan of salvation, the Apostle Peter preached to those that gathered after the initial outpouring of the Holy Ghost on the day of Pentecost (Acts 2:1,2,3,4). After they heard Peter preach the Gospel of Jesus Christ, they were fully convicted and asked Peter and the other eleven disciples "What shall we do?" Peter responded:

Repent, be baptized everyone of you in the name of Jesus Christ for the remission of sins, and you shall receive the gift of the Holy Ghost (Acts 2:38 ).

Through the spiritual understanding Peter received from Christ, Peter knew the Lord intended that His name would be called in the act of baptism. You have to wonder if what Peter preached was not the enlightenment that all of the eleven apostles (excluding Mathias) received during  the opening of their understanding, surely that one of the other ten disciples would have spoken up, would have challenged him. That didn't happen! Baptism in name of Jesus Christ is exactly what Jesus prescribed. 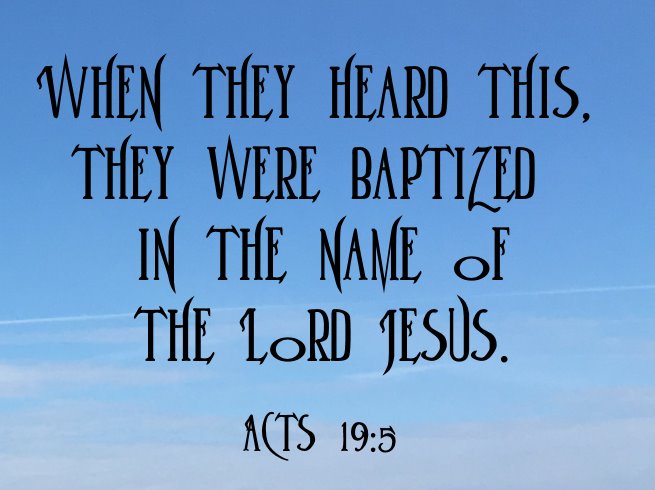 How was the Gospel Propagated?

Just before Jesus was taken up He said:

But ye shall receive power, after that the Holy Ghost is come upon you: and ye shall be witnesses unto me both in Jerusalem, and in all Judaea, and in Samaria, and unto the uttermost part of the earth (Acts 1:8 ).

That is exactly what His disciples did! In Acts chapters 2, 8, 10 and 19 you can see that they prescribed His name in the baptismal ceremony:

And he commanded them to be baptized in the name of the Lord (Acts 10:48).

When they heard this, they were baptized in the name of the Lord Jesus (Acts 19:5).

Was anybody in the Bible baptized in the Name of the Father, the Son and the Holy Ghost?

From Baptism to Repentance

From Baptism to Born Again