Acts 2:38 is the proper response to the Gospel of Jesus Christ (that is the death, the burial, and the resurrection of Jesus - 1 Corinthians 15:1-4), in that it explicitly describes how one would die, be buried and be resurrected, all to a new life in Christ:

The Day of Pentecost

The beginning of the Book of Acts sets the stage for the day of Pentecost, which is fifty days after the Passover, the day Jesus was crucified:

Until the day in which he was taken up, after that he through the Holy Ghost had given commandments unto the apostles whom he had chosen: To whom also he shewed himself alive after his passion by many infallible proofs, being seen of them forty days, and speaking of the things pertaining to the kingdom of God: And, being assembled together with them, commanded them that they should not depart from Jerusalem, but wait for the promise of the Father, which, saith he, ye have heard of me. For John truly baptized with water; but ye shall be baptized with the Holy Ghost not many days hence. When they therefore were come together, they asked of him, saying, Lord, wilt thou at this time restore again the kingdom to Israel? And he said unto them, It is not for you to know the times or the seasons, which the Father hath put in his own power. But ye shall receive power, after that the Holy Ghost is come upon you: and ye shall be witnesses unto me both in Jerusalem, and in all Judaea, and in Samaria, and unto the uttermost part of the earth.  And when he had spoken these things, while they beheld, he was taken up; and a cloud received him out of their sight (Acts 1:2-9 ).

Then returned they unto Jerusalem from the mount called Olivet, which is from Jerusalem a sabbath day's journey. And when they were come in, they went up into an upper room, where abode both Peter, and James, and John, and Andrew, Philip, and Thomas, Bartholomew, and Matthew, James the son of Alphaeus, and Simon Zelotes, and Judas the brother of James.  These all continued with one accord in prayer and supplication, with the women, and Mary the mother of Jesus, and with his brethren. And in those days Peter stood up in the midst of the disciples, and said, (the number of names together were about an hundred and twenty ( Acts 1:12-15).

And when the day of Pentecost was fully come, they were all with one accord in one place (Acts 2:1).

And suddenly there came a sound from heaven as of a rushing mighty wind, and it filled all the house where they were sitting. And there appeared unto them cloven tongues like as of fire, and it sat upon each of them. And they were all filled with the Holy Ghost, and began to speak with other tongues, as the Spirit gave them utterance (Acts 2:2-4). 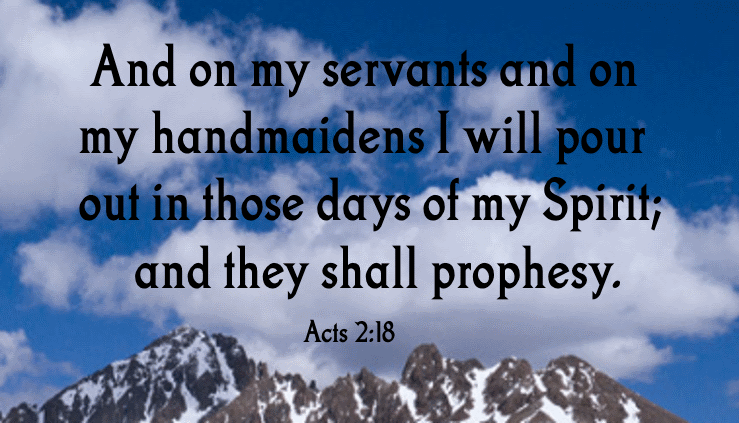 "This is That" Spoken by the Prophet Joel

The news spread quickly (Acts 2:5-12) the day of Pentecost when the locals heard the Galileans from the Upper Room speaking in tongues, that is, languages other than their own. Those listening to the Galileans speaking in different languages mocked them saying they were drunk:

Others mocking said, These men are full of new wine (Acts 2:13).

The Apostle Peter, responded to their accusation with the other eleven disciples standing with Peter. These disciples, other than Matthias (who replaced Judas as described in Acts 1) were with Peter when Jesus stated the Great Commission (parallel versus in the synoptic gospels - Matthew 28:18-20, Mark 16:15-20 and Luke 24:45-53).

This response was the first sermon preached in the Church, the Body of Christ (Colossians 1:18), and it included Acts 2:38. Of course, it had to be Peter who preached this sermon as Jesus gave him the keys to the kingdom (Matthew 16:18-19), with the gates of hell not prevailing against His church. The other disciples, who were with Peter at the Great Commission as well as stood along side him when he preached the Acts 2:38 message, never contradicted a single word preached by Peter.

Peter started his sermon by telling them that those speaking in tongues were not drunk as they had supposed but in fact is "this is that" (Acts 2:16) spoken by the prophet Joel (Joel 2:28-29)": 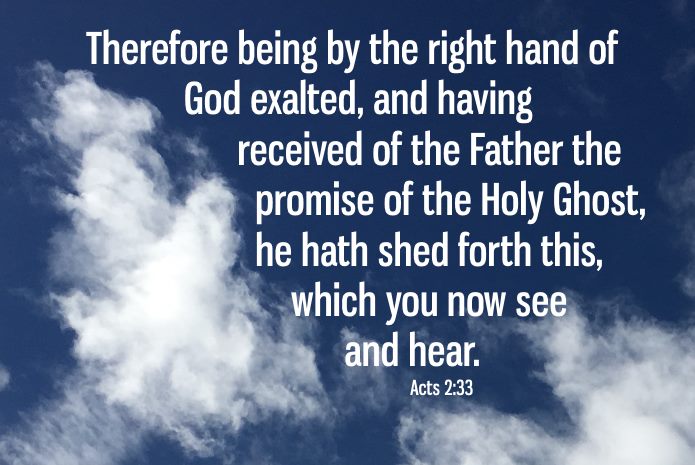 From this, one can see God's plan always has been to provide evidence when a person receives the gift of the Holy Ghost (or Holy Spirit) and that evidence is speaking in another tongue, another language, as the Spirit gives utterance.

Peter goes on to preach the gospel; the death, the burial and the resurrection of Jesus Christ (1 Corinthians 15:1-4), to the multitude, of which approximately  three thousand souls (Acts 2:41) were saved that day:

Him, being delivered by the determinate counsel and foreknowledge of God, ye have taken, and by wicked hands have crucified and slain (Acts 2:23).

He seeing this before spake of the resurrection of Christ, that his soul was not left in hell, neither his flesh did see corruption (Acts 2:31).

This Jesus hath God raised up, whereof we all are witnesses (Acts 2:32).

Before Peter finishes preaching, he tells the congregation that the one hundred and twenty people received the "promise of the Father" and that is what they have just saw and heard, the speaking in tongues, the evidence of being filled with the Holy Ghost. 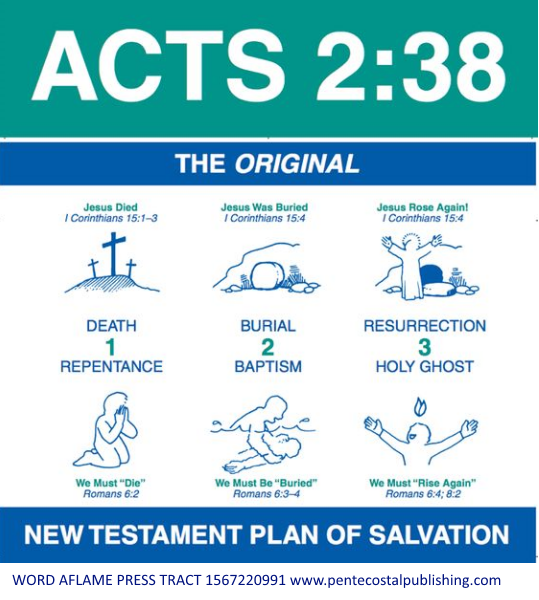 The outcome of the message Peter preached was one of conviction to those that heard the message:

Now when they heard this, they were pricked in their heart, and said unto Peter and to the rest of the apostles, Men and brethren, what shall we do (Acts 2:37)?

Peter's response to their question is the Acts 2:38 message that saves lost souls today as well as two thousand years ago:

Peter then made it clear that the response to the Gospel of Jesus Christ - Acts 2:38 - is for all:

For the promise is unto you, and to your children, and to all that are afar off, even as many as the Lord our God shall call. And with many other words did he testify and exhort, saying, Save yourselves from this untoward generation  Acts 2:39, 40).

Don't be confused by "even as many as the Lord our God shall call" for Jesus has put a measure of faith in every soul:

The three thousand were baptized:

Continued in The Apostles' Doctrine and The Fellowship of Believers Began

It didn't end after they were baptized as they continued in the Apostles' Doctrine  with the beginning of the fellowship of the most high saints of God.

And they continued stedfastly in the apostles' doctrine and fellowship, and in breaking of bread, and in prayers. And fear came upon every soul: and many wonders and signs were done by the apostles. And all that believed were together, and had all things common; And sold their possessions and goods, and parted them to all men, as every man had need (Acts 2:42-45).

From that time on the church grew as lost souls were saved.

And they, continuing daily with one accord in the temple, and breaking bread from house to house, did eat their meat with gladness and singleness of heart, Praising God, and having favour with all the people. And the Lord added to the church daily such as should be saved (Acts 2:42-47).

In the Word, Jesus says that believers will repent, be baptized, receive the gift of the Holy Ghost, and speak in tongues:

And saying, The time is fulfilled, and the kingdom of God is at hand: repent ye, and believe the gospel  (Mark 1:15).

Receive the gift of the Holy Ghost:

In the last day, that great day of the feast, Jesus stood and cried, saying, If any man thirst, let him come unto me, and drink. He that believeth on me, as the scripture hath said, out of his belly shall flow rivers of living water. (But this spake he of the Spirit, which they that believe on him should receive: for the Holy Ghost was not yet given; because that Jesus was not yet glorified (John 7:37-39).

When Jesus said those things, He was foreshadowing the Acts 2:38 message that was preached on the Day of Pentecost. In other words, we cannot be a believer unless we repent, be baptized in the name of Jesus Christ for the remission of sins and receive the gift of the Holy Ghost with the evidence of speaking in tongues.

From Acts 2:38 to Gospel of Jesus Christ

From Acts 2:38 to The Apostles' Doctrine