The word believe (pisteuō G4100), means to have faith (in, upon, or with respect to, a person or thing), i.e. credit; by implication, to entrust (especially one's spiritual well-being to Christ):—believe(-r), commit (to trust), put in trust with.

Let's look at how "pisteuō" is used in Scripture to understand its meaning more thoroughly.

This scripture, from the mouth of Jesus Christ, is probably the most widely known biblical verse around the world, among non-Christians as well as Christians:

For God so loved the world, that he gave his only begotten Son, that whosoever believeth in him should not perish, but have everlasting life (John 3:16).

It is the epitome of the love that God had for mankind. This definitely fits into the definition of leaving "one's spiritual well-being to Christ." 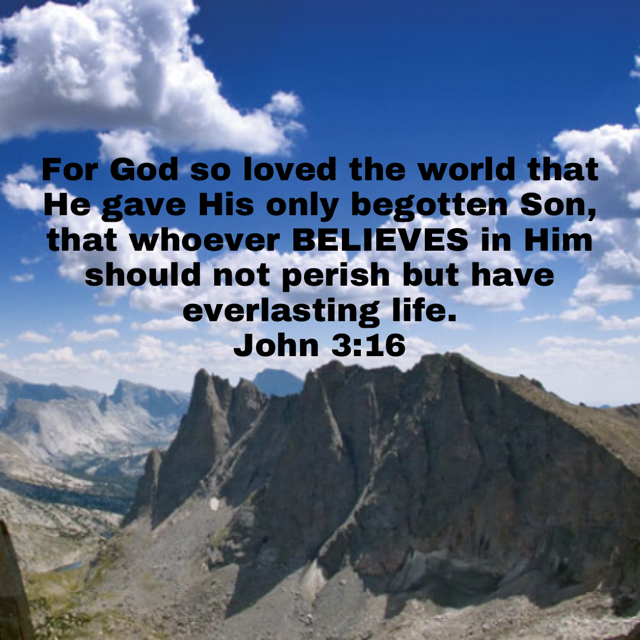 There are many other scriptures that reflect God's love towards believers. Here are a few:

Now when he was in Jerusalem at the passover, in the feast day, many believed in his name, when they saw the miracles which he did (John 2:23).

That if thou shalt confess with thy mouth the Lord Jesus, and shalt believe in thine heart that God hath raised him from the dead, thou shalt be saved. For with the heart man believeth unto righteousness; and with the mouth confession is made unto salvation (Romans 10:9-10).

And we have known and believed the love that God hath to us. God is love; and he that dwelleth in love dwelleth in God, and God in him (1 John 4:16).

What else did Jesus say about believing?

In the Word, Jesus says that believers will repent, be baptized, receive the gift of the Holy Ghost and speak in tongues:

And saying, The time is fulfilled, and the kingdom of God is at hand: repent ye, and believe the gospel (Mark 1:15). 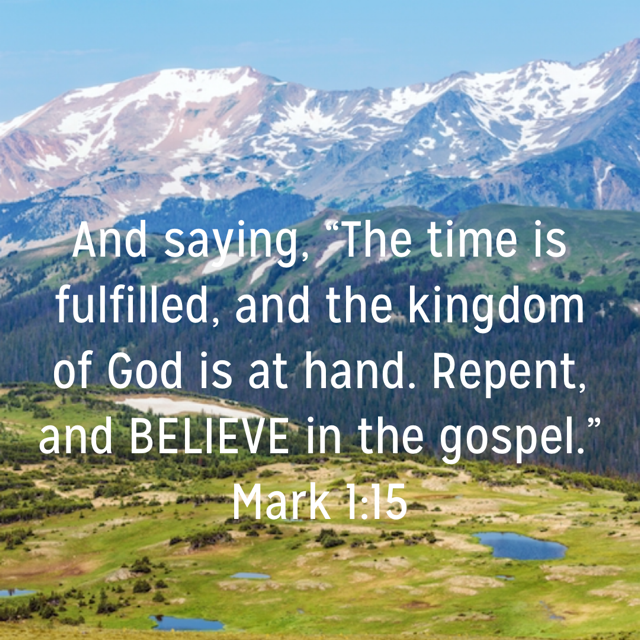 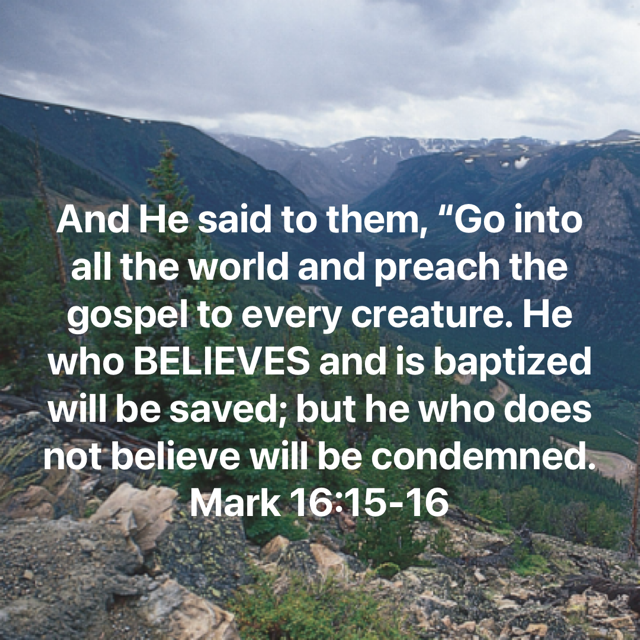 Receive the gift of the Holy Ghost:

In the last day, that great day of the feast, Jesus stood and cried, saying, If any man thirst, let him come unto me, and drink. He that believeth on me, as the scripture hath said, out of his belly shall flow rivers of living water. (But this spake he of the Spirit, which they that believe on him should receive: for the Holy Ghost was not yet given; because that Jesus was not yet glorified (John 7:37-39). 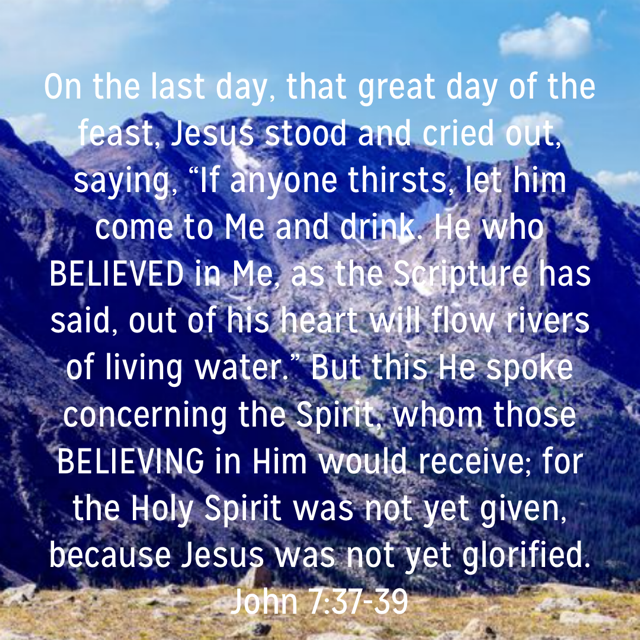 On the day of Pentecost, the Holy Spirit was poured out on humanity:

And they were all filled with the Holy Ghost, and began to speak with other tongues, as the Spirit gave them utterance . (Acts 2:4)

On that same day, the Apostle Peter preached the gospel (Jesus' death, burial and resurrection as defined in 1 Corinthians 15:1-4) as written in Acts 2:5-36. 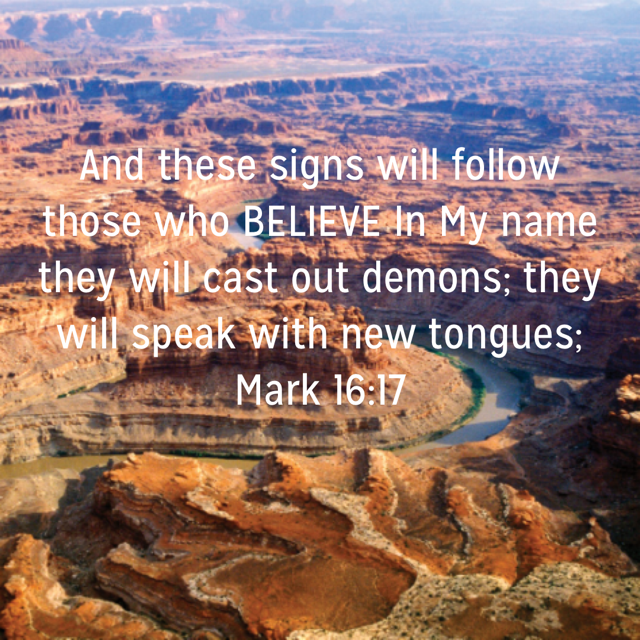 After Peter preached this message, the crowd that was gathered there asked Jesus' disciples what they needed to do:

Now when they heard this, they were pricked in their heart, and said unto Peter and to the rest of the apostles, Men and brethren, what shall we do? (Acts 2:37)

From these scriptures it is easy to see that leaving one's spiritual well-being to Jesus has a much deeper meaning. Clearly, believing is more than just mental assent that He loves you and will take care of your spiritual well-being. It also means that you will do what He tells you to do! From the scriptures above, it is easy to see that Jesus is saying that believers must repent, that they must be baptized and that they must be filled with the Holy Ghost with the evidence of speaking in tongues.

For Believers, Jesus is God

Jesus also said that believers would believe that He is the I Am, that He is God:

Believest thou not that I am in the Father, and the Father in me? the words that I speak unto you I speak not of myself: but the Father that dwelleth in me, he doeth the works (John 14:10).

Believe me that I am in the Father, and the Father in me: or else believe me for the very works' sake. (John 14:11)

For the Father himself loveth you, because ye have loved me, and have believed that I came out from God (John 16:27).

That they all may be one; as thou, Father, art in me, and I in thee, that they also may be one in us: that the world may believe that thou hast sent me (John 17:21).

Ponder on these scriptures and ask yourself, "How can I be a believer if I don't believe that Jesus Christ is the one and only true God?" 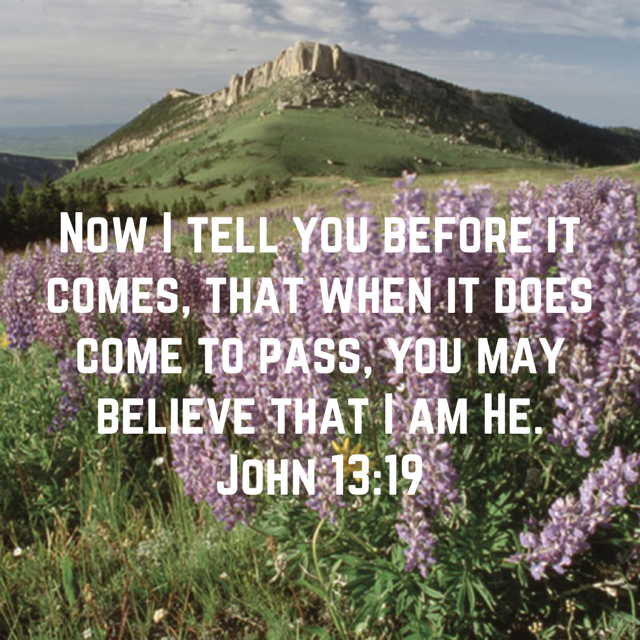 Other Scriptures that Connect Believing to Obedience!

But when they believed Philip preaching the things concerning the kingdom of God, and the name of Jesus Christ, they were baptized, both men and women (Acts 8:12).

To him give all the prophets witness, that through his name whosoever believeth in him shall receive remission of sins (Acts 10:43).

And brought them out, and said, Sirs, what must I do to be saved? And they said, believe on the Lord Jesus Christ, and thou shalt be saved, and thy house. And they spake unto him the word of the Lord, and to all that were in his house. And he took them the same hour of the night, and washed their stripes; and was baptized, he and all his, straightway (Acts 16:30-33).

And Crispus, the chief ruler of the synagogue, believed on the Lord with all his house; and many of the Corinthians hearing believed, and were baptized (Acts 18:8).

And Philip said, If thou believest with all thine heart, thou mayest. And he answered and said, I believe that Jesus Christ is the Son of God. And he commanded the chariot to stand still: and they went down both into the water, both Philip and the eunuch; and he baptized him (Acts 8:37-38).

Believe and Receive the Gift of the Holy Ghost

He said unto them, Have ye received the Holy Ghost since ye believed? And they said unto him, We have not so much as heard whether there be any Holy Ghost..... And when Paul had laid his hands upon them, the Holy Ghost came on them; and they spake with tongues, and prophesied (Acts 19:2 & 19:6).

The Apostle Peter was filled with the Holy Ghost in the Upper Room on the day of Pentecost and he spoke in tongues (Acts 2:1-4). When he preached the gospel to Cornelius and his household, the believers with him (Jews from Jerusalem), were astonished when they heard Cornelius and his household speak in tongues because they thought the gift of the Holy Ghost was only for the Jews, and not for Gentiles. They learned that Gentiles can be believers as well.

While Peter yet spake these words, the Holy Ghost fell on all them which heard the word. And they of the circumcision which believed were astonished, as many as came with Peter, because that on the Gentiles also was poured out the gift of the Holy Ghost. For they heard them speak with tongues, and magnify God (Acts 10:44-46).

Jesus said it (John 7:37-39) and the Apostles preached it, and believers were filled with the Holy Ghost with the evidence of speaking in tongues. 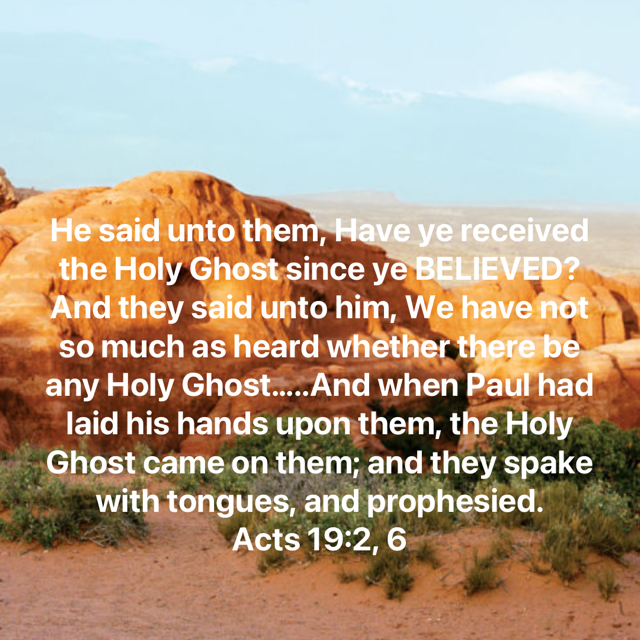 Thou are the Christ, the Son of the Living God

There are many other scriptures that declare believers know that Jesus is God:

And we believe and are sure that thou art that Christ, the Son of the living God (John 6:69).

For we which have believed do enter into rest, as he said, As I have sworn in my wrath, if they shall enter into my rest: although the works were finished from the foundation of the world (Hebrews 4:3).

But these are written, that ye might believe that Jesus is the Christ, the Son of God; and that believing ye might have life through his name (John 20:31).

For I am not ashamed of the gospel of Christ: for it is the power of God unto salvation to every one that believeth; to the Jew first, and also to the Greek (Romans 1:16).

For Believers, All things are Possible with God

Lastly, it is so important to remember that for believers, all things are possible with God:

Jesus said unto him, If thou canst believe, all things are possible to him that believeth (Mark 9:23).

And, behold, thy cousin Elisabeth, she hath also conceived a son in her old age: and this is the sixth month with her, who was called barren. For with God nothing shall be impossible (Luke 1:36-37). And blessed is she that believed: for there shall be a performance of those things which were told her from the Lord (Luke 1:45).

You can take John 3:16 at its word, and as we just learned, the same believers Jesus referred to in that scripture, will obey the Gospel of Jesus Christ, will know that Jesus is God and will know that all things are possible with God.


From Believe to Faith

From Believe to Hope

From Believe to Grace of God