And they were all filled with the Holy Ghost, and began to speak with other tongues, as the Spirit gave them utterance (Acts 2:4).

The words Ghost, Spirit, and wind in the Greek, is the word pneuma (g4151), and Strong's says it means "a current of air, i.e. breath (blast) or a breeze; by analogy or figuratively, a spirit, i.e. (human) the rational soul, (by implication) vital principle, mental disposition, etc., or (superhuman) an angel, demon, or (divine) God, Christ's spirit, the Holy Spirit:—ghost, life, spirit(-ual, -ually), mind."

What did Jesus say about the Holy Ghost?

Jesus said you must be born again, born of water and of Spirit to enter the kingdom of God,

The Lord expressed it this way just before He ascended to heaven:

And, being assembled together with them, commanded them that they should not depart from Jerusalem, but wait for the promise of the Father, which, saith he, ye have heard of me. For John truly baptized with water; but ye shall be baptized with the Holy Ghost not many days hence (Acts 1:4-5).

Receiving the gift of the Holy ghost and being baptized with the Holy Ghost mean exactly the same thing. Repentance will cause God to give us the greatest gift we could ever receive, the Holy Ghost, and we never ever have to doubt what God did for us, as He provides evidence when we speak in tongues. If you are reading this today and have never spoken in tongues, you still need to be filled with the Holy Ghost. Go to Yes I want to go to heaven! to learn what you should do next. 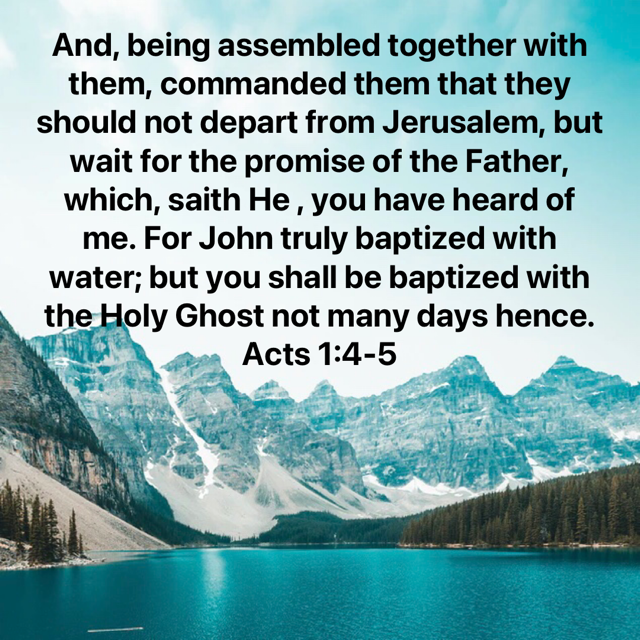 At the Feast of Tabernacles in Jerusalem, Jesus declared:

..... If any man thirst, let him come unto me, and drink. He that believeth on me, as the scripture hath said, out of his belly shall flow rivers of living water (John 7:37-38).

and the Apostle John explained in the next verse:

(But this spake he of the Spirit, which they that believe on him should receive: for the Holy Ghost was not yet given; because that Jesus was not yet glorified (John 7:39)).

Obviously when the Apostle John wrote this (late in first century), he knew exactly what "out of your belly shall flow rivers of living water" meant. He most likely didn't know at the time of the Feast what it meant, but he definitely was able to connect the dots later on as he was in the Upper Room (Acts 1:13) when the one hundred and twenty (Acts 1:15) were filled with Holy Ghost (Acts 2:4). The scripture that Jesus was referring to is Isaiah 44:3 ESV where Isaiah prophesies the outpouring of the Spirit.

Holy Spirit Baptism in the Book of Acts

As we observed in Acts 2:4, God poured out His Spirit on the day of Pentecost. In the Book of Acts there are two other times (Acts 10:1-48 & 19:1-7) when it is clear that the lost were filled with the Holy Spirit with the evidence of speaking in tongues. There is a third time, in Samaria (Acts 8:1-25) when it is intuitively obvious, as we will see, that when the Samaritans were filled with the Holy Ghost, they spoke in tongues as well. 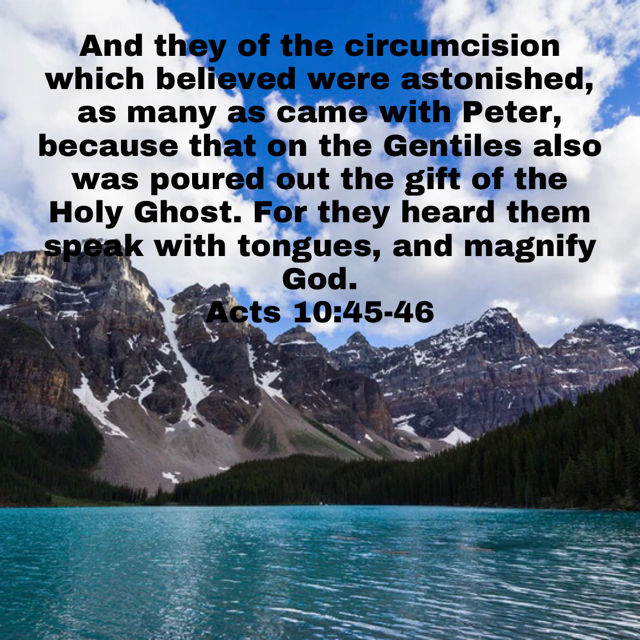 The first occurs in Cornelius' household (Acts 10:1-48), when Peter was instructed by the Lord to go to Caesarea to preach the gospel to Cornelius. While Peter was preaching, the Holy Ghost fell on the household:

While Peter was still saying these things, the Holy Spirit fell on all who heard the word. And the believers from among the circumcised who had come with Peter were amazed, because the gift of the Holy Spirit was poured out even on the Gentiles. For they were hearing them speaking in tongues and extolling God. Then Peter declared, “Can anyone withhold water for baptizing these people, who have received the Holy Spirit just as we have?” And he commanded them to be baptized in the name of Jesus Christ. Then they asked him to remain for some days (Acts 10:44-48 ESV).

There are a number of points that are extremely important about the salvation of Cornelius' household:

On Paul's third missionary journey he found some disciples of John the Baptist in Ephesus that had not heard about the Holy Spirit, so the apostle preached the Gospel of Jesus Christ to them:

And it happened that while Apollos was at Corinth, Paul passed through the inland country and came to Ephesus. There he found some disciples. And he said to them, “Did you receive the Holy Spirit when you believed?” And they said, “No, we have not even heard that there is a Holy Spirit.” And he said, “Into what then were you baptized?” They said, “Into John's baptism.” And Paul said, “John baptized with the baptism of repentance, telling the people to believe in the one who was to come after him, that is, Jesus.” On hearing this, they were baptized in the name of the Lord Jesus. And when Paul had laid his hands on them, the Holy Spirit came on them, and they began speaking in tongues and prophesying. There were about twelve men in all (Acts 19:1-7 ESV).

Notice how the Apostle Paul immediately starts preaching the gospel to John's disciples, he said, "Did you receive the Holy Spirit when you believed?" The important points to cover here are: 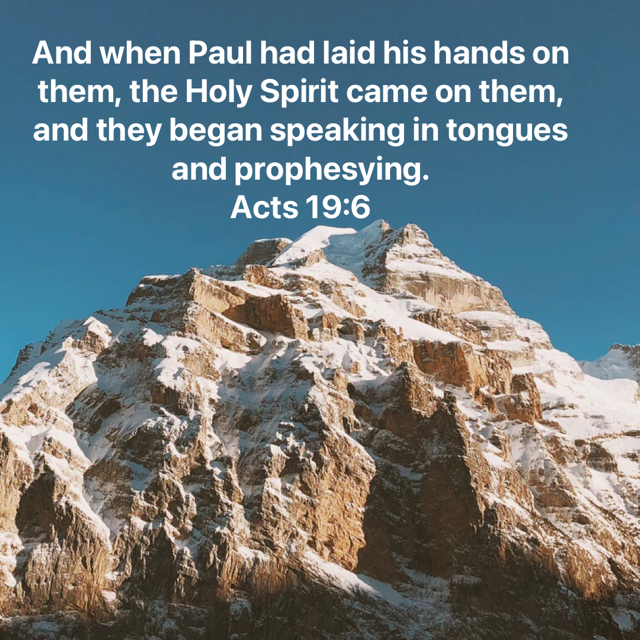 After the persecution of the church (Acts 8:1-4), the Disciples of Christ "were scattered abroad went everywhere preaching the word" (Acts 8:5). Philip went to the city of Samaria, and preached Christ unto them (Acts 8:6) with this result:

And the people with one accord gave heed unto those things which Philip spake, hearing and seeing the miracles which he did. For unclean spirits, crying with loud voice, came out of many that were possessed with them: and many taken with palsies, and that were lame, were healed. And there was great joy in that city (Acts 8:6-8).

Notice that just hearing Christ being preached can bring great joy to people without one soul being born again.

In the midst of the Samaritans was a sorcerer named Simon who bewitched the people such that they thought he was God (Acts 8:9-11). That didn't stop Phillip preaching the Gospel of Jesus Christ,

But when they believed Philip preaching the things concerning the kingdom of God, and the name of Jesus Christ, they were baptized, both men and women.(Acts 8:12),

and even Simon the sorcerer believed and was baptized. (Acts 8:13)

When the apostles in Jerusalem heard that Phillip was preaching the Gospel, they sent Peter and John to lay hands on the believers so they might receive the Holy Ghost (Acts 8:16):

Then laid they their hands on them, and they received the Holy Ghost (Acts 8:17). 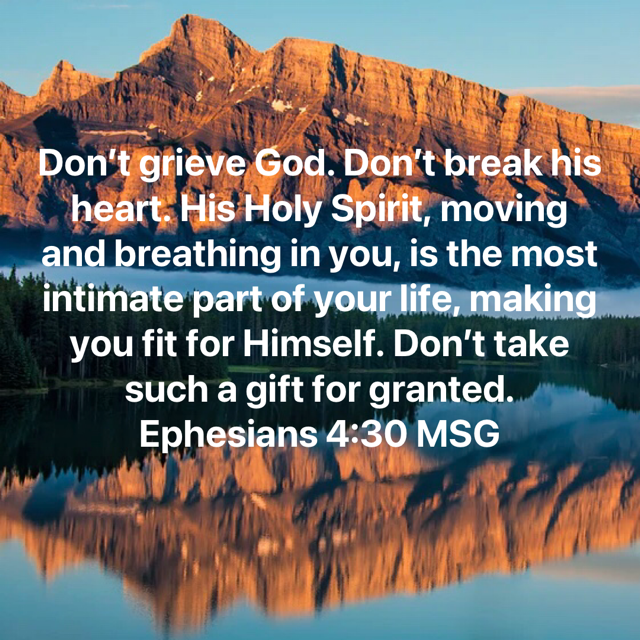 Note that in describing this event, Luke did not say they spoke in tongues like he did in Acts 10:46 and Acts 19:6. But Simon saw and heard what happened when they received the gift of the Holy Ghost and wanted to buy this power. (Acts 8:18, 19). Of course Peter rebuked Simon (Acts 8:20-23). Obviously Simon saw them filled with the Holy Ghost and heard them speak in tongues or why would he have offered money to buy the power. Remember what Peter said on the day of Pentecost when he was preaching to the three thousand:

Therefore being by the right hand of God exalted, and having received of the Father the promise of the Holy Ghost, he hath shed forth this, which ye now see and hear.(Acts 2:33).

Simon the sorcerer saw and heard, just like the approximate 3,000 souls (Acts 2:41) that were saved on the Day of Pentecost.

Repeating what I said earlier, if you are reading this today and have never spoken in tongues, you still need to be filled with the Holy Ghost. Go to Yes I want to go to heaven! to learn what you should do next. Also, if you believe that speaking in tongues has ceased, go here to learn that doctrine is absolutely false.


From Holy Ghost (Holy Spirit) to Yes, I want to go to heaven!