This description of Jezebel is from Easton's Bible Study.

Jezebel : chaste, the daughter of Ethbaal, the king of the Zidonians, and the wife of Ahab, the king of Israel (1 Kings 16:31). This was the "first time that a king of Israel had allied himself by marriage with a heathen princess; and the alliance was in this case of a peculiarly disastrous kind. Jezebel has stamped her name on history as the representative of all that is designing, crafty, malicious, revengeful, and cruel. She is the first great instigator of persecution against the saints of God. Guided by no principle, restrained by no fear of either God or man, passionate in her attachment to her heathen worship, she spared no pains to maintain idolatry around her in all its splendour. Four hundred and fifty prophets ministered under her care to Baal, besides four hundred prophets of the groves [R.V., 'prophets of the Asherah'], which ate at her table (1 Kings 18:19). 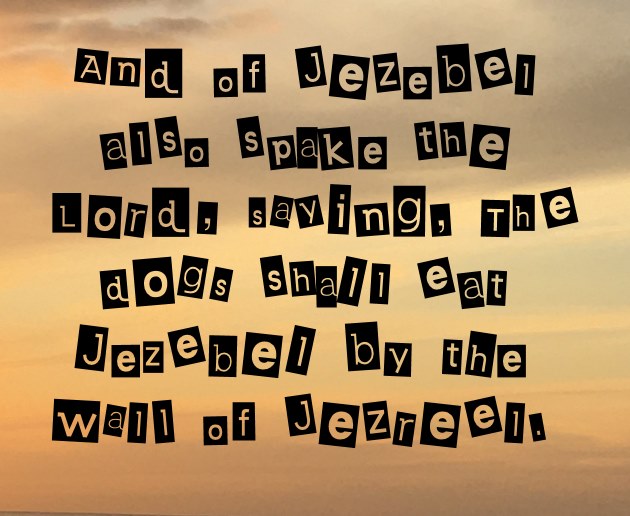 The idolatry, too, was of the most debased and sensual kind." Her conduct was in many respects very disastrous to the kingdom both of Israel and Judah (1 Kings 21:1-29). At length she came to an untimely end. As Jehu rode into the gates of Jezreel, she looked out at the window of the palace, and said, "Had Zimri peace, who slew his master?" He looked up and called to her chamberlains, who instantly threw her from the window, so that she was dashed in pieces on the street, and his horses trod her under their feet. She was immediately consumed by the dogs of the street (2 Kings 9:7-37), according to the word of Elijah the Tishbite (1 Kings 21:19).

Her name afterwards came to be used as the synonym for a wicked woman (Revelation 2:20).

It may be noted that she is said to have been the grand-aunt of Dido, the founder of Carthage.


From Jezebel to What is sin?

From Jezebel to Depart from Evil Bible Verses