This description of Michal is from Easton's Bible Dictionary.

Michal : rivulet, or who as God?, the younger of Saul's two daughters by his wife Ahinoam (1 Samuel 14:49,50). "Attracted by the graces of his person and the gallantry of his conduct, she fell in love with David and became his wife" (1 Samuel 18:20-28). She showed her affection for him by promoting his escape to Naioth when Saul sought his life (1 Samuel 19:12-17. Comp. Psalm 59. After this she did not see David for many years. Meanwhile she was given in marriage to another man, Phalti or Phaltiel of Gallim (1 Samuel 25:44), but David afterwards formally reclaimed her as his lawful wife (2 Samuel 3:13-16). 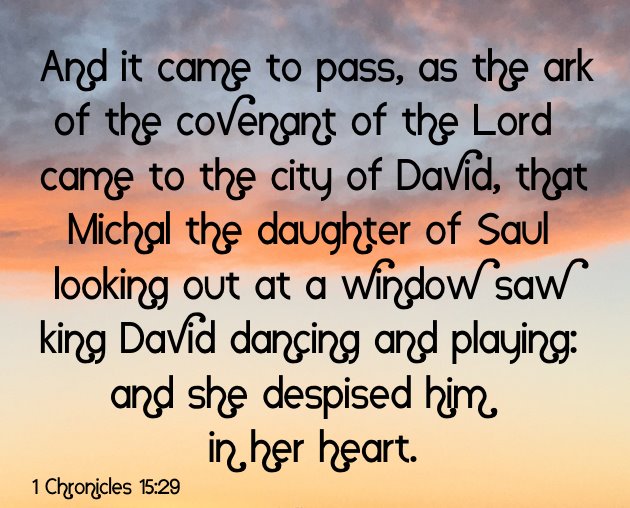 The relation between her and David soon after this was altered. They became alienated from each other. This happened on that memorable day when the ark was brought up in great triumph from its temporary resting-place to the Holy City. In David's conduct on that occasion she saw nothing but a needless humiliation of the royal dignity (1 Chronicles 15:29). She remained childless, and thus the races of David and Saul were not mixed. In 2 Samuel 21:8 her name again occurs, but the name Merab should probably be here substituted for Michal (comp. 1 Samuel 18:19).


From Michal to Worship

From Michal to King David

From Michal to Psalms and Proverbs Bible Prophecies Fulfilled