Weep or Weep Not?

Weep or weep not? The weeping prophet, Jeremiah, wrote how the city of Jerusalem wept over its many miseries after the city was taken captive:

For these things I weep; my eyes flow with tears; for a comforter is far from me, one to revive my spirit; my children are desolate, for the enemy has prevailed (Lamentations 1:16 NKJV).

In reality, it was God who wept because He had to punish them for their sins and for their transgressions against Him. He did that by allowing them to be captured by the Babylonians:

Her oppressors have become her masters, and her enemies prosper, for the Lord has punished Jerusalem for her many sins. Her children have been captured and taken away to distant lands (Lamentations 1:5 NLT).

In Chapter 3 of Lamentations, the prophet remembers that God is faithful and that He will save them:

The faithful love of the Lord never ends! His mercies never cease. Great is his faithfulness; his mercies begin afresh each morning. I say to myself, The Lord is my inheritance; therefore, I will hope in him!” The Lord is good to those who depend on him, to those who search for him. So it is good to wait quietly for salvation from the Lord (Lamentations 3:22-26 NLT).

God was faithful! Jerusalem's weeping was rewarded. Daniel repented on behalf of the nation (Daniel 9:15-19) and God restored them to Jerusalem in approximately 536 BC (see Daniel's Prayer).

Now as He drew near, He saw the city and wept over it, saying, If you had known, even you, especially in this your day, the things that make for your peace! But now they are hidden from your eyes (Luke 19:41-42 NKJV).

So why did Jesus weep over Jerusalem? He knew they would not fully receive and respond to the New Covenant. He knew they would not embrace Him and what was to come, but instead they would reject and crucify Him. Fortunately for us (Gentiles) He did die on the cross, He was buried and He rose again, giving us the Gospel of Jesus Christ to obey.

Repentance (dying to self in obedience to the Gospel of Jesus Christ) is always associated with godly sorrow:

For godly sorrow produces repentance leading to salvation, not to be regretted; but the sorrow of the world produces death (2 Corinthians 7:10 NKJV). 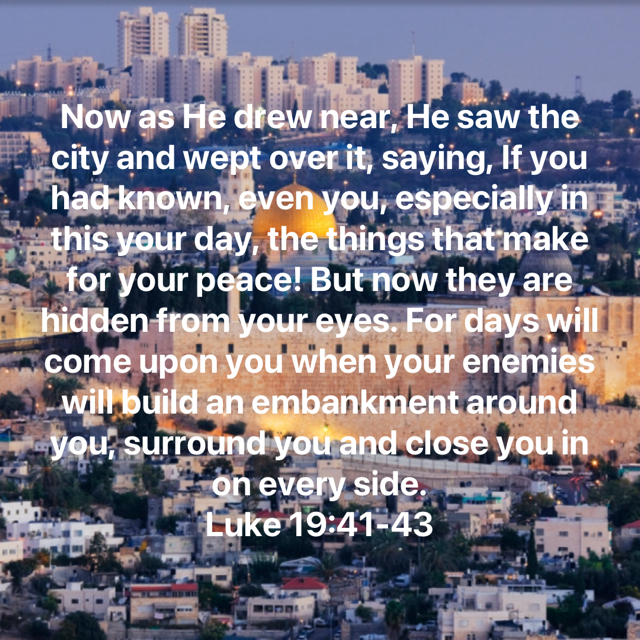 How could we possibly repent and "weep not" when God is changing us from sinner to saint? That is not possible! For example look at the Apostle Peter's repentance after he forsook Jesus:

If you have never shed a tear over your sins and have never been filled with the Holy Ghost, speaking in tongues as the Spirit gives utterance (Acts 2:4), ask yourself if you are really repenting, really desiring to not sin willfully, and are really submitting and turning your life to Jesus Christ. One cannot receive the gift of the Holy Ghost without repentance. We may fool ourselves into believing that we have repented but it is impossible to fool God.

Weep or weep not? There is no doubt that if Jesus wept over the Jews (and still is today), He is certainly weeping over Gentiles that do not obey the Gospel.

The world population today is about 7.8 billion.  Based on 2015 worldwide population and mortality rate, 57,000,000 people die each year.

God has given every human being a measure of faith (Romans 12:3) which allows every person since the day of Pentecost (Acts 2:1) to be saved. Having said that though, approximately two-thirds of the world population do not even profess to be Christian, which means that in 2015 "at least" 38,000,000 lost souls died and did not go to heaven. Weep or weep not?

Why do I say "at least" above? Because most professing Christians do not believe in "Bible Truth" and "Gospel Preaching". Take for instance the Catholic denomination of Christianity and their "Trinitarian" beliefs: 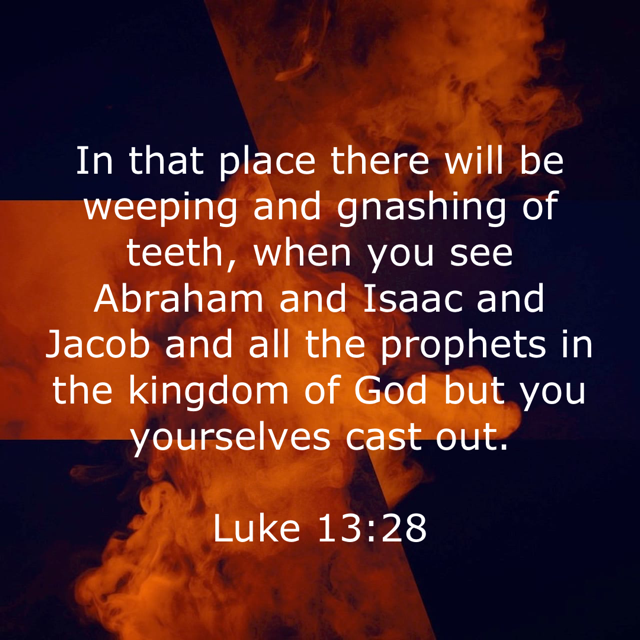 As you see above, I did not discuss other Catholic Sacraments. I did this on purpose because most of the Protestants in the world believe and practice the same thing as the Catholics, i.e. without the other Sacraments. That means we can add approximately another two billion "Christians", in total, to the list of those that don't profess to be Christian, meaning that in 2015 (and by using the same death ratio) there were approximate 58,000,000 unsaved souls that died. Weep or weep not?

Our choice: Weep or weep not?

Let's suppose for a minute that we are in hell because we never obeyed (2 Thessalonians 1:7,8) the Gospel of Jesus Christ. Jesus says "There shall be weeping and gnashing of teeth" (Luke 13:28). It may be that we, for whatever reason, are fine with that notion. What about though, down in that lake of fire, we here our children weeping and screaming "mom, dad why did you let this happen, why didn't you tell us the truth?" Sad, sad thought, right? Don't let that happen. Obey the gospel and teach it to your children:

Train up a child in the way he should go, And when he is old he will not depart from it (Proverbs 22:6 NKJV).

You shall teach them to your children, speaking of them when you sit in your house, when you walk by the way, when you lie down, and when you rise up (Deuteronomy 11:19 NKJV).

Don't let the enemy prevail as the Comforter which is the Holy Ghost (John 14:26) will be far from you:

For these things I weep; my eyes flow with tears; for a comforter is far from me, one to revive my spirit; my children are desolate, for the enemy has prevailed (Lamentations 1:16 NKJV).

Weep or weep not?


From Weep or Weep Not? to Book of Lamentations

From Weep or Weep Not? to Gospel of Jesus Christ

From Weep or Weep Not? to Born Again