This description of Abraham is from Easton's Bible Dictionary.

Abraham: father of a multitude, son of Terah, named (Genesis 11:27) before his older brothers Nahor and Haran, because he was the heir of the promises. Till the age of seventy, Abram sojourned among his kindred in his native country of Chaldea. He then, with his father and his family and household, quitted the city of Ur, in which he had hitherto dwelt, and went some 300 miles north to Haran, where he abode fifteen years. The cause of his migration was a call from God (Acts 7:2-4). There is no mention of this first call in the Old Testament; it is implied, however, in Genesis 12. While they tarried at Haran, Terah died at the age of 205 years. Abram now received a second and more definite call, accompanied by a promise from God (Genesis 12:1,2); whereupon he took his departure, taking his nephew Lot with him, "not knowing whither he went" (Hebrews 11:8). He trusted implicitly to the guidance of Him who had called him.

Abram now, with a large household of probably a thousand souls, entered on a migratory life, and dwelt in tents. Passing along the valley of the Jabbok, in the land of Canaan, he formed his first encampment at Sichem (Genesis 12:6), in the vale or oak-grove of Moreh, between Ebal on the north and Gerizim on the south. Here he received the great promise, "I will make of thee a great nation," etc. (Genesis 12:2,3,7). 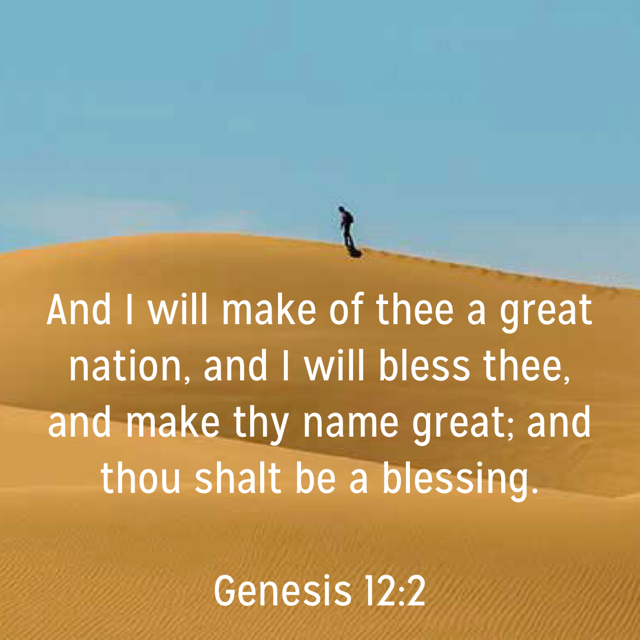 This promise comprehended not only temporal but also spiritual blessings. It implied that he was the chosen ancestor of the great Deliverer whose coming had been long ago predicted (Genesis 3:15). Soon after this, for some reason not mentioned, he removed his tent to the mountain district between Bethel, then called Luz, and Ai, towns about two miles apart, where he built an altar to "Jehovah." He again moved into the southern tract of Palestine, called by the Hebrews the Negeb; and was at length, on account of a famine, compelled to go down into Egypt. This took place in the time of the Hyksos, a Semitic race which now held the Egyptians in bondage. Here occurred that case of deception on the part of Abram which exposed him to the rebuke of Pharaoh (Genesis 12:18). Sarai was restored to him; and Pharaoh loaded him with presents, recommending him to withdraw from the country.

He returned to Canaan richer than when he left it, "in cattle, in silver, and in gold" (Genesis 12:8; 13:2. Comp. Psalm 105:13,14). The whole party then moved northward, and returned to their previous station near Bethel. Here disputes arose between Lot's shepherds and those of Abram about water and pasturage. Abram generously gave Lot his choice of the pasture-ground. (Comp. 1 Corinthians 6:7.) He chose the well-watered plain in which Sodom was situated, and removed thither; and thus the uncle and nephew were separated. Immediately after this Abram was cheered by a repetition of the promises already made to him, and then removed to the plain or "oak-grove" of Mamre, which is in Hebron. He finally settled here, pitching his tent under a famous oak or terebinth tree, called "the oak of Mamre" (Genesis 13:18). This was his third resting-place in the land.

Some fourteen years before this, while Abram was still in Chaldea, Palestine had been invaded by Chedorlaomer, King of Elam, who brought under tribute to him the five cities in the plain to which Lot had removed. This tribute was felt by the inhabitants of these cities to be a heavy burden, and after twelve years they revolted. This brought upon them the vengeance of Chedorlaomer, who had in league with him four other kings. He ravaged the whole country, plundering the towns, and carrying the inhabitants away as slaves. 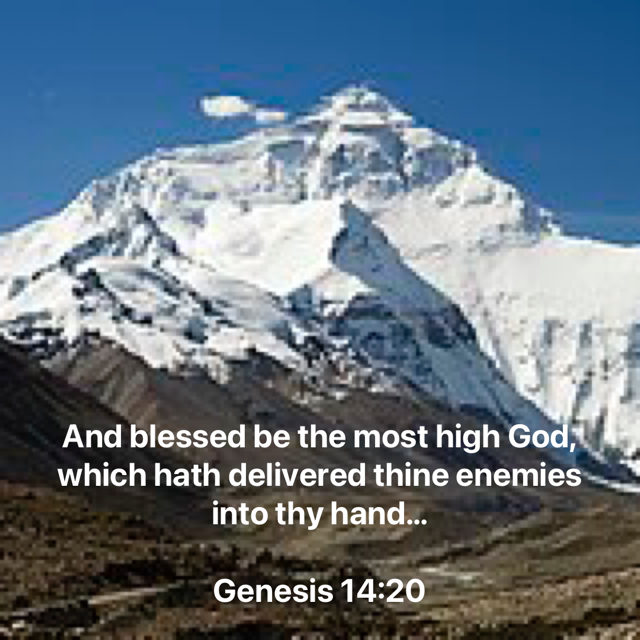 Among those thus treated was Lot. Hearing of the disaster that had fallen on his nephew, Abram immediately gathered from his own household a band of 318 armed men, and being joined by the Amoritish chiefs Mamre, Aner, and Eshcol, he pursued after Chedorlaomer, and overtook him near the springs of the Jordan. They attacked and routed his army, and pursued it over the range of Anti-Libanus as far as to Hobah, near Damascus, and then returned, bringing back all the spoils that had been carried away. Returning by way of Salem, i.e., Jerusalem, the king of that place, Melchizedek, came forth to meet them with refreshments. To him Abram presented a tenth of the spoils, in recognition of his character as a priest of the most high God (Genesis 14:18-20).

In a recently-discovered tablet, dated in the reign of the grandfather of Amraphel (Genesis 14:1), one of the witnesses is called "the Amorite, the son of Abiramu," or Abram.

Having returned to his home at Mamre, the promises already made to him by God were repeated and enlarged (Genesis 13:14). "The word of the Lord" (an expression occurring here for the first time) "came to him" (Genesis 15:1). He now understood better the future that lay before the nation that was to spring from him. Sarai, now seventy-five years old, in her impatience, persuaded Abram to take Hagar, her Egyptian maid, as a concubine, intending that whatever child might be born should be reckoned as her own. Ishmael was accordingly thus brought up, and was regarded as the heir of these promises (Genesis 16). When Ishmael was thirteen years old, God again revealed yet more explicitly and fully his gracious purpose; and in token of the sure fulfilment of that purpose the patriarch's name was now changed from Abram to Abraham (Genesis 17:4,5), and the rite of circumcision was instituted as a sign of the covenant. It was then announced that the heir to these covenant promises would be the son of Sarai, though she was now ninety years old; and it was directed that his name should be Isaac. At the same time, in commemoration of the promises, Sarai's name was changed to Sarah. 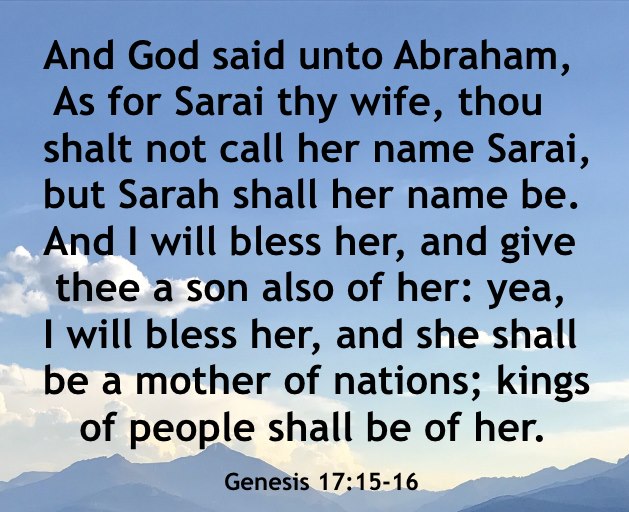 On that memorable day of God's thus revealing his design, Abraham and his son Ishmael and all the males of his house were circumcised (Genesis 17). Three months after this, as Abraham sat in his tent door, he saw three men approaching. They accepted his proffered hospitality, and, seated under an oak-tree, partook of the fare which Abraham and Sarah provided. One of the three visitants was none other than the Lord, and the other two were angels in the guise of men. The Lord renewed on this occasion his promise of a son by Sarah, who was rebuked for her unbelief. Abraham accompanied the three as they proceeded on their journey. The two angels went on toward Sodom; while the Lord tarried behind and talked with Abraham, making known to him the destruction that was about to fall on that guilty city. The patriarch interceded earnestly in behalf of the doomed city. But as not even ten righteous persons were found in it, for whose sake the city would have been spared, the threatened destruction fell upon it; and early next morning Abraham saw the smoke of the fire that consumed it as the "smoke of a furnace" (Genesis 19:1-28).

After fifteen years' residence at Mamre, Abraham moved southward, and pitched his tent among the Philistines, near to Gerar. Here occurred that sad instance of prevarication on his part in his relation to Abimelech the King (Genesis 20). Soon after this event, the patriarch left the vicinity of Gerar, and moved down the fertile valley about 25 miles to Beer-sheba. It was probably here that Isaac was born, Abraham being now an hundred years old. A feeling of jealousy now arose between Sarah and Hagar, whose son, Ishmael, was no longer to be regarded as Abraham's heir. Sarah insisted that both Hagar and her son should be sent away. This was done, although it was a hard trial to Abraham (Genesis 21:12). 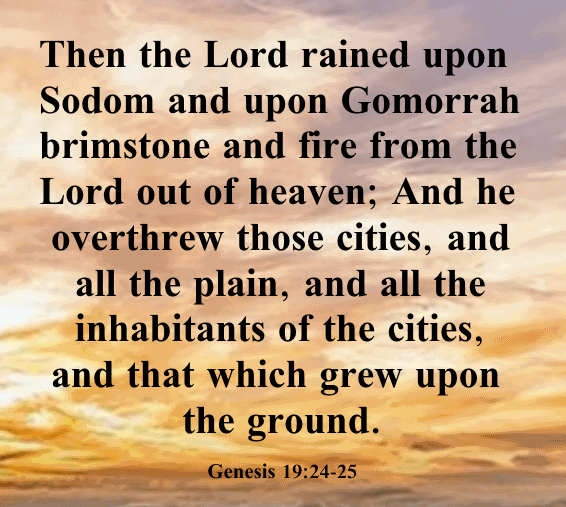 At this point there is a blank in the patriarch's history of perhaps twenty-five years. These years of peace and happiness were spent at Beer-sheba. The next time we see him his faith is put to a severe test by the command that suddenly came to him to go and offer up Isaac, the heir of all the promises, as a sacrifice on one of the mountains of Moriah. His faith stood the test (Hebrews 11:17-19). He proceeded in a spirit of unhesitating obedience to carry out the command; and when about to slay his son, whom he had laid on the altar, his uplifted hand was arrested by the angel of Jehovah, and a ram, which was entangled in a thicket near at hand, was seized and offered in his stead. From this circumstance that place was called Jehovah-jireh, i.e., "The Lord will provide." The promises made to Abraham were again confirmed (and this was the last recorded word of God to the patriarch); and he descended the mount with his son, and returned to his home at Beer-sheba (Genesis 22:19), where he resided for some years, and then moved northward to Hebron.

Some years after this Sarah died at Hebron, being 127 years old. Abraham acquired now the needful possession of a burying-place, the cave of Machpelah, by purchase from the owner of it, Ephron the Hittite (Genesis 23); and there he buried Sarah. His next care was to provide a wife for Isaac, and for this purpose he sent his steward, Eliezer, to Haran (or Charran, Acts 7:2), where his brother Nahor and his family resided (Genesis 11:31). The result was that Rebekah, the daughter of Nahor's son Bethuel, became the wife of Isaac (Genesis 24). Abraham then himself took to wife Keturah, who became the mother of six sons, whose descendants were afterwards known as the "children of the east" (Judges 6:3), and later as "Saracens." At length all his wanderings came to an end. At the age of 175 years, 100 years after he had first entered the land of Canaan, he died, and was buried in the old family burying-place at Machpelah (Genesis 25:7-10).

The history of Abraham made a wide and deep impression on the ancient world, and references to it are interwoven in the religious traditions of almost all Eastern nations. He is called "the friend of God" (James 2:23), "faithful Abraham" (Galatians 3:9), "the father of us all" (Romans 4:16).


From Abraham to Book of Genesis

From Abraham to Abraham's Promise

From Abraham to Yes, I want to go to heaven!