This description of Esau is from Easton's Bible Study.

Esau: hairy, Rebekah's first-born twin son (Genesis 25:25). The name of Edom, "red", was also given to him from his conduct in connection with the red lentil "pottage" for which he sold his birthright (Genesis 30,31). The circumstances connected with his birth foreshadowed the enmity which afterwards subsisted between the twin brothers and the nations they founded (Genesis 25:22,23,26). In process of time Jacob, following his natural bent, became a shepherd; while Esau, a "son of the desert," devoted himself to the perilous and toilsome life of a huntsman. On a certain occasion, on returning from the chase, urged by the cravings of hunger, Esau sold his birthright to his brother, Jacob, who thereby obtained the covenant blessing (Genesis 27:28,29,36; Hebrews 12:16,17). He afterwards tried to regain what he had so recklessly parted with, but was defeated in his attempts through the stealth of his brother (Genesis 27:4,34,38). 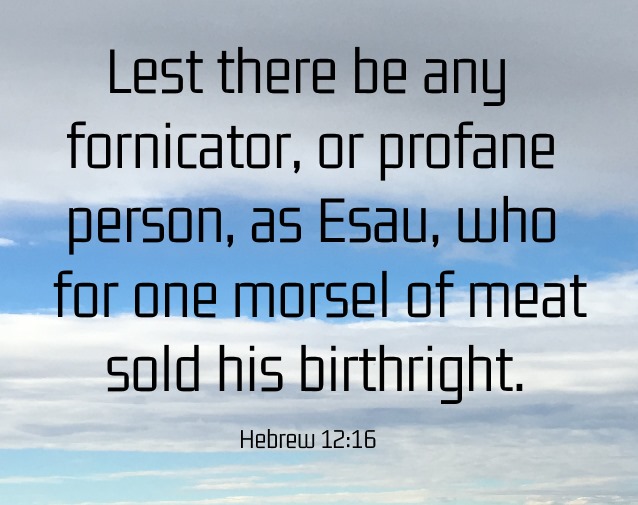 At the age of forty years, to the great grief of his parents, he married (Genesis 26:34,35) two Canaanitish maidens, Judith, the daughter of Beeri, and Bashemath, the daughter of Elon. When Jacob was sent away to Padan-aram, Esau tried to conciliate his parents (Genesis 28:8,9) by marrying his cousin Mahalath, the daughter of Ishmael. This led him to cast in his lot with the Ishmaelite tribes; and driving the Horites out of Mount Seir, he settled in that region. After some thirty years' sojourn in Padan-aram Jacob returned to Canaan, and was reconciled to Esau, who went forth to meet him (Genesis 33:4). Twenty years after this, Isaac their father died, when the two brothers met, probably for the last time, beside his grave (Genesis 35:29). Esau now permanently left Canaan, and established himself as a powerful and wealthy chief in the land of Edom (which see).

Long after this, when the descendants of Jacob came out of Egypt, the Edomites remembered the old quarrel between the brothers, and with fierce hatred they warred against Israel.


From Esau to Book of Genesis

From Esau to Isaac

From Esau to Speaking in Tongues