This description of Hannah is from Easton's Bible Dictionary.

Hannah: favour, grace, one of the wives of Elkanah the Levite, and the mother of Samuel (1 Samuel 1; 2). Her home was at Ramathaim-zophim, whence she was wont every year to go to Shiloh, where the tabernacle had been pitched by Joshua, to attend the offering of sacrifices there according to the law (Exodus 23:15; 34:18; Deuteronomy 16:16), probably at the feast of the Passover (comp. Exodus 13:10). On occasion of one of these "yearly" visits, being grieved by reason of Peninnah's conduct toward her, she went forth alone, and kneeling before the Lord at the sanctuary she prayed inaudibly. Eli the high priest, who sat at the entrance to the holy place, observed her, and misunderstanding her character he harshly condemned her conduct (1 Samuel 1:14-16). After hearing her explanation he retracted his injurious charge and said to her, "Go in peace: and the God of Israel grant thee thy petition." Perhaps the story of the wife of Manoah was not unknown to her. Thereafter Elkanah and his family retired to their quiet home, and there, before another Passover, Hannah gave birth to a son, whom, in grateful memory of the Lord's goodness, she called Samuel, i.e., "heard of God." 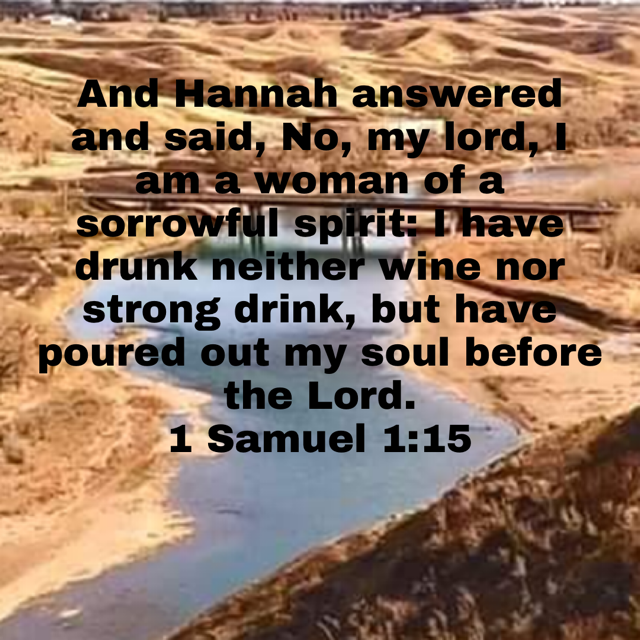 After the child was weaned (probably in his third year) she brought him to Shiloh into the house of the Lord, and said to Eli the aged priest, "Oh my lord, I am the woman that stood by thee here, praying unto the Lord. For this child I prayed; and the Lord hath given me my petition which I asked of him: therefore I also have granted him to the Lord; as long as he liveth he is granted to the Lord" (1 Samuel 1:27,28, R.V.). Her gladness of heart then found vent in that remarkable prophetic song (1 Samuel 2:1-10; comp. Luke 1:46-55) which contains the first designation of the Messiah under that name (1 Samuel 2:10, "Annointed" = "Messiah"). And so Samuel and his parents parted. He was left at Shiloh to minister "before the Lord." And each year, when they came up to Shiloh, Hannah brought to her absent child "a little coat" (Heb. meil, a term used to denote the "robe" of the ephod worn by the high priest, Exodus 28:31), a priestly robe, a long upper tunic (1 Chronicles 15:27), in which to minister in the tabernacle (1 Samuel 2:19; 15:27; Job 2:12). "And the child Samuel grew before the Lord." After Samuel, Hannah had three sons and two daughters.


From Hannah to Books of Samuel

From Hannah to God is Love

From Hannah to Constrained by the Love of Christ