This description of Nineveh is from Easton's Bible Dictionary.

Nineveh: First mentioned in Genesis 10:11, which is rendered in the Revised Version, "He [i.e., Nimrod] went forth into Assyria and built Nineveh." It is not again noticed till the days of Jonah, when it is described (Jonah 3:3; 4:11) as a great and populous city, the flourishing capital of the Assyrian empire (2 Kings 19:36; Isaiah 37:37). The book of the prophet Nahum is almost exclusively taken up with prophetic denunciations against this city. Its ruin and utter desolation are foretold (Nah.1:14; Isaiah 3:19, etc.). Zephaniah also (Zeph 2:13-15) predicts its destruction along with the fall of the empire of which it was the capital. From this time there is no mention of it in Scripture till it is named in gospel history (Matthew 12:41; Luke 11:32).

This "exceeding great city" lay on the eastern or left bank of the river Tigris, along which it stretched for some 30 miles, having an average breadth of 10 miles or more from the river back toward the eastern hills. This whole extensive space is now one immense area of ruins. Occupying a central position on the great highway between the Mediterranean and the Indian Ocean, thus uniting the East and the West, wealth flowed into it from many sources, so that it became the greatest of all ancient cities.

About B.C. 633 the Assyrian empire began to show signs of weakness, and Nineveh was attacked by the Medes, who subsequently, about B.C. 625, being joined by the Babylonians and Sasianians, again attacked it, when it fell, and was razed to the ground. The Assyrian empire then came to an end, the Medes and Babylonians dividing its provinces between them. "After having ruled for more than six hundred years with hideous tyranny and violence, from the Caucasus and the Caspian to the Persian Gulf, and from beyond the Tigris to Asia Minor and Egypt, it vanished like a dream" (Nahum 2:6-11). Its end was strange, sudden, and tragic. It was God's doing, his judgement on Assyria's pride (Isaiah 10:5-19). 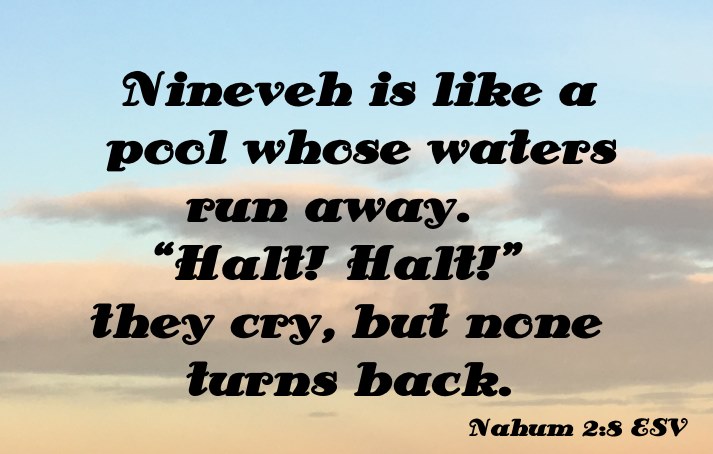 Forty years ago our knowledge of the great Assyrian empire and of its magnificent capital was almost wholly a blank. Vague memories had indeed survived of its power and greatness, but very little was definitely known about it. Other cities which had perished, as Palmyra, Persepolis, and Thebes, had left ruins to mark their sites and tell of their former greatness; but of this city, imperial Nineveh, not a single vestige seemed to remain, and the very place on which it had stood was only matter of conjecture. In fulfilment of prophecy, God made "an utter end of the place." It became a "desolation."

In the days of the Greek historian Herodotus, B.C. 400, it had become a thing of the past; and when Xenophon the historian passed the place in the "Retreat of the Ten Thousand," the very memory of its name had been lost. It was buried out of sight, and no one knew its grave. It is never again to rise from its ruins.

At length, after being lost for more than two thousand years, the city was disentombed. A little more than forty years ago the French consul at Mosul began to search the vast mounds that lay along the opposite bank of the river. The Arabs whom he employed in these excavations, to their great surprise, came upon the ruins of a building at the mound of Khorsabad, which, on further exploration, turned out to be the royal palace of Sargon, one of the Assyrian kings. They found their way into its extensive courts and chambers, and brought forth form its hidded depths many wonderful sculptures and other relics of those ancient times.

The work of exploration has been carried on almost continuously by M. Botta, Sir Henry Layard, George Smith, and others, in the mounds of Nebi-Yunus, Nimrud, Koyunjik, and Khorsabad, and a vast treasury of specimens of old Assyrian art has been exhumed. Palace after palace has been discovered, with their decorations and their sculptured slabs, revealing the life and manners of this ancient people, their arts of war and peace, the forms of their religion, the style of their architecture, and the magnificence of their monarchs. The streets of the city have been explored, the inscriptions on the bricks and tablets and sculptured figures have been read, and now the secrets of their history have been brought to light. 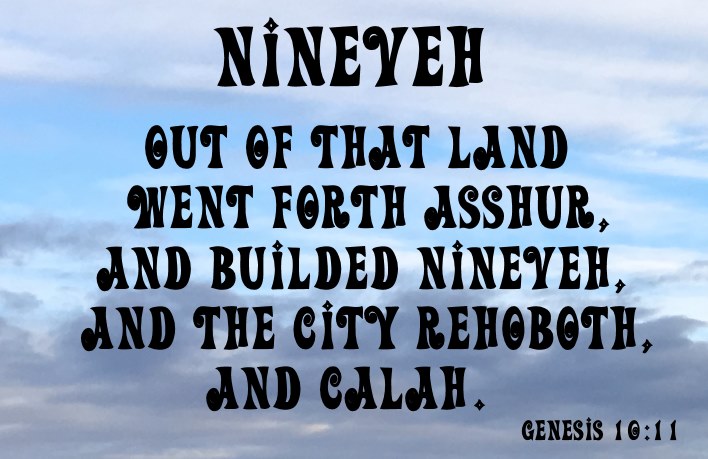 One of the most remarkable of recent discoveries is that of the library of King Assur-bani-pal, or, as the Greek historians call him, Sardanapalos, the grandson of Sennacherib (which see). This library consists of about ten thousand flat bricks or tablets, all written over with Assyrian characters. They contain a record of the history, the laws, and the religion of Assyria, of the greatest value. These strange clay leaves found in the royal library form the most valuable of all the treasuries of the literature of the old world. The library contains also old Accadian documents, which are the oldest extant documents in the world, dating as far back as probably about the time of Abraham.

"The Assyrian royalty is, perhaps, the most luxurious of our century [reign of Assur-bani-pa]...Its victories and conquests, uninterrupted for one hundred years, have enriched it with the spoil of twenty peoples. Sargon has taken what remained to the Hittites; Sennacherib overcame Chaldea, and the treasures of Babylon were transferred to his coffers; Esarhaddon and Assur-bani-pal himself have pillaged Egypt and her great cities, Sais, Memphis, and Thebes of the hundred gates...Now foreign merchants flock into Nineveh, bringing with them the most valuable productions from all countries, gold and perfume from South Arabia and the Chaldean Sea, Egyptian linen and glass-work, carved enamels, goldsmiths' work, tin, silver, Phoenician purple; cedar wood from Lebanon, unassailable by worms; furs and iron from Asia Minor and Armenia" (Ancient Egypt and Assyria, by G. Maspero, page 271).

The bas-reliefs, alabaster slabs, and sculptured monuments found in these recovered palaces serve in a remarkable manner to confirm the Old Testament history of the kings of Israel. The appearance of the ruins shows that the destruction of the city was due not only to the assailing foe but also to the flood and the fire, thus confirming the ancient prophecies concerning it. "The recent excavations," says Rawlinson, "have shown that fire was a great instrument in the destruction of the Nineveh palaces. Calcined alabaster, charred wood, and charcoal, colossal statues split through with heat, are met with in parts of the Nineveh mounds, and attest the veracity of prophecy."

Nineveh in its glory was (Jonah 3:4) an "exceeding great city of three days' journey", i.e., probably in circuit. This would give a circumference of about 60 miles. At the four corners of an irregular quadrangle are the ruins of Kouyunjik, Nimrud, Karamless and Khorsabad. These four great masses of ruins, with the whole area included within the parallelogram they form by lines drawn from the one to the other, are generally regarded as composing the whole ruins of Nineveh.


From Nineveh to Bible Studies

From Nineveh to Book of Jonah

From Nineveh to  Book of Nahum