The story of the Tower of Babel is a significant point in the history of mankind. The Lord recognized that man, speaking in one language could cooperate with each other to build anything that they could imagine, including this tower.

Here is the entire scripture that covers this event in the Bible:

And the whole earth was of one language, and of one speech. And it came to pass, as they journeyed from the east, that they found a plain in the land of Shinar; and they dwelt there. And they said one to another, Go to, let us make brick, and burn them thoroughly. And they had brick for stone, and slime had they for morter. And they said, Go to, let us build us a city and a tower, whose top may reach unto heaven; and let us make us a name, lest we be scattered abroad upon the face of the whole earth. And the Lord came down to see the city and the tower, which the children of men builded. And the Lord said, Behold, the people is one, and they have all one language; and this they begin to do: and now nothing will be restrained from them, which they have imagined to do. Go to, let us go down, and there confound their language, that they may not understand one another's speech. So the Lord scattered them abroad from thence upon the face of all the earth: and they left off to build the city. Therefore is the name of it called Babel; because the Lord did there confound the language of all the earth: and from thence did the Lord scatter them abroad upon the face of all the earth. (Genesis 11:1-9)

Thus God scattered mankind around the world, with separate languages and national boundaries. The period of dispersion ended with the death of Terah, Abraham's father in approximately 2100 BC. 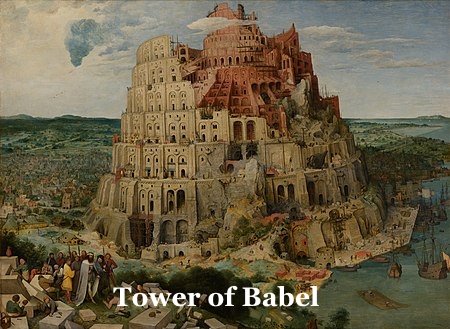 A depiction of Tower of Babel (image from Wikipedia)

Meaning of "Let us"

Trinitarians would like the world to believe that the "let us" in the following passage is the Tri-Union God.

Go to, let us go down, and there confound their language, that they may not understand one another's speech. (Genesis 11:7)

There are so many problems with this viewpoint. Here are some of them:

Then God said, ‘Let us make mankind in our image, in our likeness. (Genesis 1:26)

So what does the " let us" refer to?  Gerhard F Hasel writes:

"The plural "let us" in the phrase "let us make man" in Gen 1:26 has a long history of interpretation, reaching into pre-Christian times. What does the plural "us" in this enigmatic phrase indicate? Should it be changed to the singular or does it indeed have a plural meaning? If it has a plural meaning, is its intention to express an address between gods, or between God and heavenly beings, or between God and earth or earthly elements? Is it a plural of majesty, a plural of deliberation, or a plural of fullness? These suggestions and their supporting arguments will receive critical consideration with an attempt to evaluate their cogency." [HASEL G, THE MEANING OF "LET US" IN GN 1:26]

This is an excellent article to read but in the end the conclusion of monotheism has to prevail, that is, there is only one God and God is One - He manifested Himself in the flesh as Jesus Christ (John 1:1,14 and 1 Timothy 3:16)

From Tower of Babel to Abraham's Promise

From Tower of Babel to Jesus is God